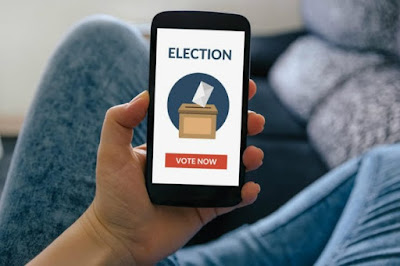 Voting is one of the use cases that could be incorporated into the blockchain network as and this part of what devoted blockcchain enthusiasts and experts have encouraged governments to step up their electoral systems and incorporate blockchain network in their electoral process.
And in recent times we have seen countries like Sierra Leone  whic is the first to adopt the blockchain voting process.
Then Russia’s blockchain-based voting system for the Constitutional amendments is off to a rocky start after going live earlier on Thursday 25th June 2020, according to local media reports.
E-voting, scheduled to take place from June 25 to June 30 for residents of Moscow and Nizhniy Novgorod, is based on the Exonum blockchain platform developed by Bitfury. The blockchain will allegedly help to encrypt votes to provide secure and immutable data.
Moscow and Nizhniy Novgorod residents can vote offline or online via a special website that, according to a report from RIA news agency, was inaccessible during the first few hours after going live.
According to a Central Election Commission, or CEC
official, the outage happened due to “peak demand” from constituents. Meanwhile, Otkritiye Media reported that only 494 Moscow residents voted on the amendments online within the first hour. They note that a total of 65 thousand e-bulletins had been issued at that point.

Meduza, a local news outlet, reports that E-voting has demonstrated abnormal results in certain regions. For instance, nearly 7,300 people assigned to a polling station in Troitsky Administrative Okrug have registered to vote online, despite the station only having a total of 2,358 residents eligible to vote, based on January 2020 data. The local electoral commission stated that this was “a technical malfunction”.
Local journalist, Pavel Lobkov, described how he successfully managed to vote twice today using the system: he initially voted offline at his polling station, and then voted online an hour later. CEC head, Ella Pamfilova, called Lobkov’s actions “a provocation”.
Cointelegraph reached out to Bitfury to discuss the reported inconsistencies and issues with their e-voting platform’s transparency, but the company declined to comment.

Putin’s term is the main amendment

If approved, the Constitutional amendments will theoretically allow Vladimir Putin to serve two more six-year terms, meaning that he may remain president until 2036.
Putin’s views on cryptocurrencies remain unclear. He has urged the government to adopt a cryptocurrency framework in the past, but it has consistently failed to meet his appointed deadlines.
As previously reported by Cointelegraph, Russia traded the most Bitcoin (BTC) on LocalBitcoins peer-to-peer exchange for the months of April and May 2020.